Great Portraits, Even in the Winter 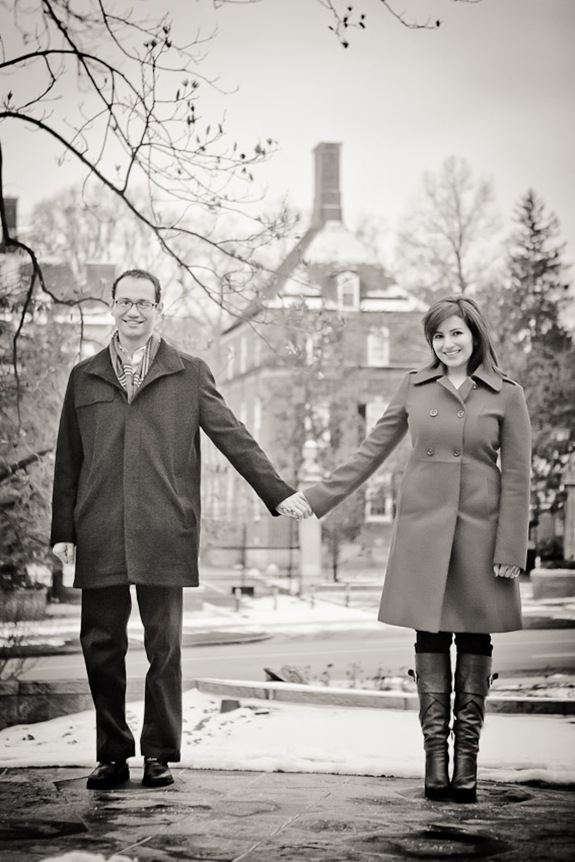 If you’ve worked with us in the past, or even browsed our galleries, you probably know we’re not too about studio photography. Instead, we prefer things more natural, quirky or fun. The winter months prove a challenge when aiming to capture those images. The options really seem limited to taking photographs indoors with a set up of studio lights, or going to a local studio (if that’s your thing, we’ll be happy to recommend some great ones). But most of the time, that’s far from being a satisfying solution.

A studio lighting set up will eat up time that should be used to capture valuable images. Sitting in front of those lights for forty-five minutes can also have the effect of bringing out your most fabulous of fake smiles. And, of course, how much variety can you really accomplish in front of the fire place?

There are better solutions.

For adults and older children, tough it and go outside.

We don’t do much of the “sit there, put your chin there, put your foot there, tilt your head that way, fill your mouth with marshmallows and say ‘chubby-bunny’ “. Instead, we’re usually letting you pose yourself, as much as possible, in order to capture more of you being you. For children, we usually play with them and capture images as we go.

9 out of 10 times, even in the cold, outside is the best place to do this. Because there’s more variety—more to do and more to see—as long as you bundle up, you probably won’t even notice that it’s cold.

Some people may think that they can’t look their best in coats, scarves, gloves and hats. But in reality, the realistic almost always wins over the picture-perfect. The slightest “imperfections” can provide your images with the natural, realistic quality that will give them that life-long likeability that we don’t realize how much we really love until we see them in old photo albums.

So instead of aiming for picture-perfect, aim for natural. That means, look good, but bundle up. Throw a couple extra layers on the kids and take them to a park. Let them play and romp around and before long they won’t even notice the cold. And you probably won’t either.

For small children and babies, your own home is probably the best location.

Some of our smaller friends, however, just won’t be able to handle the cold. That’s a simple reality. Most of the time they can’t tell us how cold they are and the best they can do is exercise their vocal chords in a string of ambiguous vowel sounds. In that case, the best option is usually your own home—even if you don’t think it looks great. It almost always turns out much better than you’d expect.

Toddlers usually have lots of toys to play with and a messy play room often times makes a fantastic setting for natural photographs. Smaller children and babies look great in their crib or enjoying some ‘tummy time’ on the floor with mom or dad.

There are a few limitations and drawbacks to shooting in your own home, however.

For example, most homes don’t have enough natural light and using a single flash is necessary (not a studio light set up); and we can often mimic the look of natural light using clever flash techniques. Also a concern is that homes with very vibrant or very dark colors on the wall will not allow us to use our flash units. And, some children find the camera’s flash to be jarring, though they usually get used to it after a few minutes.

Choose the location that’s best for you.

Whether it’s images of a family, children, babies, couples, teens or whatever else, capturing outstanding images in the winter time, is not a lost cause. It’s simply a matter of choosing what makes the most sense for you. Where possible, get comfortable and go outside. Where little one’s just won’t stand for it, don’t even worry about leaving your home. We’ll come to you, at no additional charge (provided you’re within our standard traveling distance).