What happens to the images we don’t deliver? 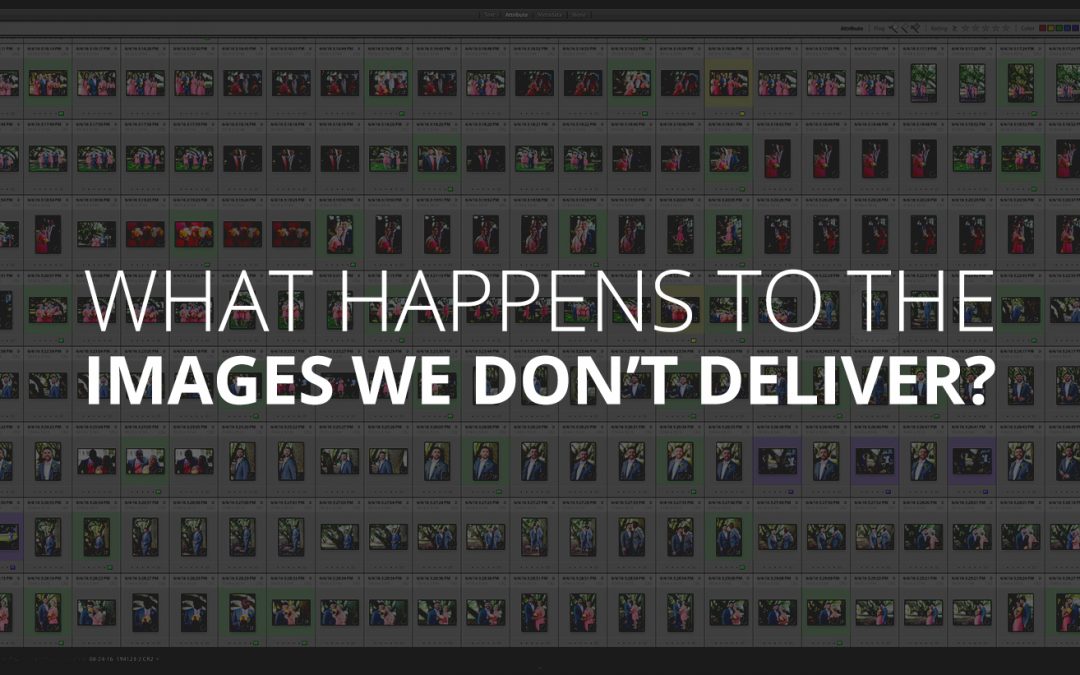 This is a question that comes up from time to time. When we shoot a portrait session for example, we might take anywhere between 250 and 500 images, but we’ll only end up sending you around 50, and often less. At a wedding, we’ll take way more. Sometimes as many as 4000 images over the course of a whole day, but when it’s all done, we may only send around 600 (or about 50 per hour shooting), and sometimes less. It’s no mystery how this happens either. You can *see* your photographer taking a ton of photos.

For some, this begs the question what is happening to all those leftover images. I always imagine these folks are very optimistic in their day to day lives. They seem to think that the images they haven’t seen must be pure magic. As if their photographer would ever actually want to keep them from seeing an amazing image they took.

They’re not pure magic, though. It’s a whole lotta nothing. The undelivered images, waiting to eventually drift off and never be seen again, fall into three basic categories.

When we’ve arranged a photo of a group of people, for example, everyone’s eyes are blinking at different times, people are moving, and things might be in motion in the background. When we’ve worked to set up a shot, we’re going to take a bunch of very similar images to make sure we get everyone’s best expressions, and sometimes, in case we need to open someone’s eyes or fix a half smile later.

Ultimately, the less “stable” an image is, and the more fleeting the collection of qualities in the image, the more likely we are to keep the shutter moving. For example, we might burst as many as 5 or 10 images the moment the baby smiles, or immediately after uncle Louie cracks a particularly good joke.

Redundancy makes up the bulk of our images that are left undelivered. We select the very best from all the redundancies, leverage the redundancy to improve selected images and then save you the time and frustration of having to differentiate a zillion images that look almost exactly the same.

Most of these undelivered images come from situations with poor lighting conditions. A really good photographer only needs vague outlines to compose a decent photo, but it’s impossible for them to tell what the real results of the image will be until it’s been captured. As a result, often about 15% of images captured on the dance floor, and sometimes more, are left undelivered because someone ended up looking really bad at that particular moment.

Things like serious wardrobe malfunctions, easily misconstrued facial expressions and unfortunately placed shadows are all likely to disqualify a photo.

The smallest minority of undelivered images are those images that just don’t turn out, or were never intended to be seen in the first place. These may be images your photographer quickly captured to test out the light, or experiment with a different collection of camera settings.

Occasionally, if your photographer experiences an equipment malfunction, the image may be severely over or under exposed, or could be badly out of focus. These things can also happen if your photographer just has a brain fart and drops the ball for a moment. This kind of thing can sometimes happen during a really engaging shoot taking place across a variety of different lighting conditions.

Ultimately, these are the images that the photographer might just delete immediately after taking it, were it not for being much easier to just wait and discard them later.

So what becomes of the undelivered images?

Eventually, they are permanently purged from all archives. Under no circumstances do we ever invite someone to browse the extended catalog of undelivered images. However, while they are still being stored, there are some circumstances where images that have been rejected may be supplied. Generally speaking this is only in the case of tragedies, such as when someone is trying to collect all possible images of a family member after a sudden loss.

Delivered images on the other hand are stored perpetually in the archives for later retrieval. If you cannot locate images from a session you held with us in the past, we can pull them from the archive for a small fee.