Better Photos With Your Phone: Strike a Pose 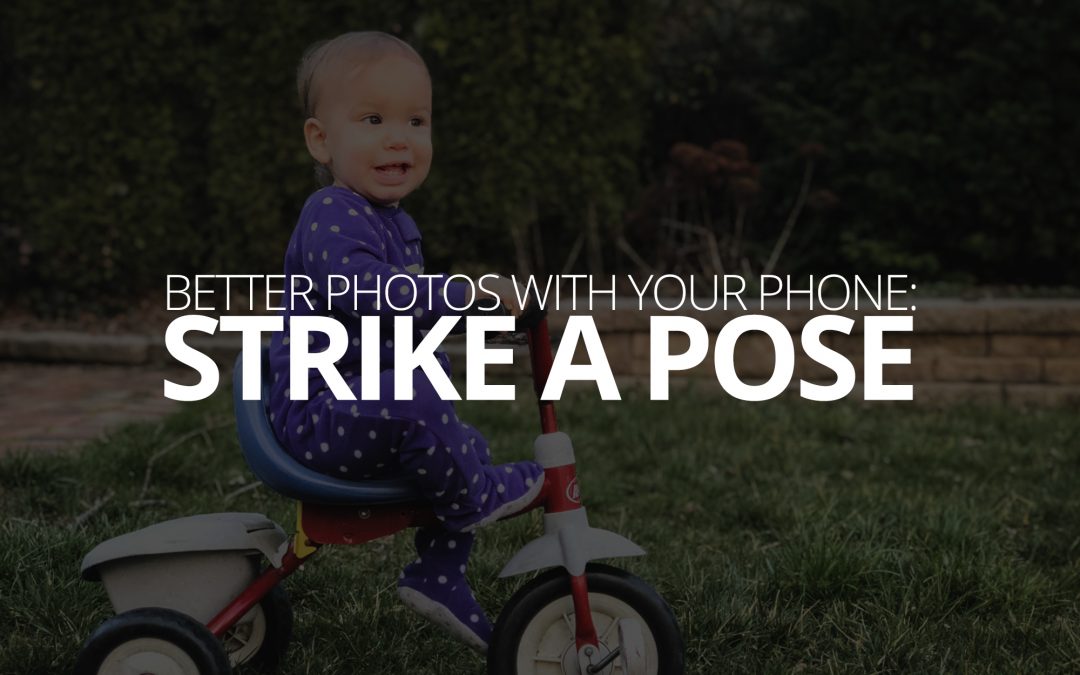 Here we are at the end of our blog series on capturing better everyday images with your cellphone. This will be our last entry for now. it’s been fun trying to think through the really important points of photography, so that someone who doesn’t care much about photography itself can make use of it to greater effect. I hope you’ve gotten something useful out of it too, and are perhaps feeling a little pride about the progress you’ve made over these last three months or so.

Before we roll it up and pack it in with this, I just want to touch on one more thing you might want to try—posing. Or, more specifically, posing people you’re taking photos of. This isn’t for everyone, but as far as getting better photos with your phone on a casual basis, this is the next step for a lot of folks. “Posing” could be as simple as asking two people to stand closer together, or it could be as complex as some avant garde vogue magazine cover. Though, for the purposes of this last entry, we’re looking more at things like the former and leaving the latter to the rest of the internet.

The Purpose of Posing

“Posing” has gotten a bad name over the years, perhaps because of the colloquialism ‘poser’, which still has a sting to it for a lot of people. Or perhaps it’s because of the many photographers being lazy and doing it badly. Whatever the case, try to keep an open mind. Photographers pose their subjects to help them look their best, and when they’re doing it well, it isn’t obvious that anyone is posing at all.

Now, I’m not here advocating that you bark orders at the people you want to take pictures with. But rather, just to get some idea of what photographers do when they take a picture of someone, so you can use the best parts of that skill to improve the photos you take, even just a little bit.

Lets talk about the biggest, most impactful stuff.

When you’re taking a picture of any two or more people, the distance between them will seem different in a photo, than what it seems like in real life; the distances people are typically comfortable with in real life seem very far apart in a photo. So if you tell a group of people to get together for a photo, you’ll also probably need to tell them to get closer together, and after they do, they’ll probably still be too far apart.

So, in a plutonic group of people, try telling them to move closer to each other until their clothes are touching the clothes on the people beside them. In a familial group, you can go ahead and tell them to press right up against each other. This is undoubtedly a little uncomfortable, but often makes for an amusing experience. Although it will feel too close together in the moment, the photo will be markedly better, as long as no one’s face is hiding behind anyone else.

Photos of people standing upright with their hands at their sides look a little awkward. Even in real life, our hands rarely just hang there when we’re engaged with someone or something. Instead, we tend to find something to do with them. We stick them in our pockets, place them on a surface nearby, hold them together, or hold an object—a drink, a pair of glasses, or a cellphone perhaps.

When hands just hang at your side, they encourage bad posture, and can cause shoulders to slouch—especially on children.

When you’re taking a picture of a person, find something to do with their hands and the photo will look better. Any of the above options are good, if they’re natural. Tell them to keep their drink in hand, have kids put their thumbs under their backpack straps, stick hands in pockets or use them to hold a purse. I would suggest you avoid telling people to put their hands on their hips as people tend to do this in an overly dramatic fashion and it ends up making the photo look worse.

Much like hanging arms, but to a somewhat lesser degree, human beings don’t often have both feet firmly planted on the floor too often. When we’re sitting, we tend to cross our legs, and when we’re standing we’re usually shifting from one foot to the other. But, this isn’t how people usually behave when they get in front of someone taking a picture. Suddenly it’s hands at the sides and feet on the floor.

Shake this up by telling people to stand on one foot, or to get comfortable and cross their legs casually. Even if their legs aren’t in the picture, this will have a subtle effect on their posture which is often flattering as well as natural looking.

Having things to rest weight on is a staple of portrait photography, and for good reason: People get stiff when a camera is pointing at them, and anything that can help catch their weight will help them look and feel more comfortable, and thus help make for a better looking photo. Once their leaning, you can take the picture from pretty much any side, but I suggest keeping whatever their leaning on to the left or right, rather than straight ahead.

Most people are a little thinner from front to back than they are from side to side. So, when you’re taking a photo of someone, having them twist their spine and neck a little bit can make them appear slimmer and almost everyone wants that.

To get the right effect, have them point their toes far to one side and then twist from their head down until they’re facing the camera. Combine this with taking the weight off of one foot and giving them something to do with their hands, and suddenly you’re looking at a pretty natural and flattering portrait, just using your phone.

Another point about the spine—almost everyone is slouching more than they feel like they are. So, remind everyone to straighten their back, even if it looks like they’re already straight. Ask them to take a very deep breath and then hold that posture; breathing very deeply forces us to straighten up our backs, so this technique will work for everyone——just so long as they don’t emphatically let out a big gust of breath, which will return them to a slouched posture. So you want them to hold their posture, not their breath.

A ‘double chin’ is everyone’s worst nightmare when it comes to a photo, and absent any instructions, people do all kinds of weird moves to try and hide that appearance when a photo is being taken. But, if you give a little instruction and help them avoid it, they’re going to love the photos you take.

The easiest way to avoid the appearance of a double chin (especially if there actually is a naturally occurring one), is to take the photo from an angle where they have to look up at the phone. This is why so many selfies are taken from up high. In our case though, don’t shoot ‘down’ on the person, just get an extra 10 inches higher and everyone will look a little better.

It’s not just shooting from higher up, anything that helps people stretch their neck out a little bit will help reduce the appearance of a double chin. So you can also ask them to slide their head foreword—similar to the way a chicken pecks—and it will have a similar effect.

Besides just hiding a double chin, the neck often looks the best and produces the most natural look, when it’s twisted from one side or the other, which also further reduces the appearance of a double chin. Just point their body one way, and their chin the opposite way and you’ll see what I mean.

It’s easy to overthink posing and to give someone so many instructions that they look like some kind of emotionless rag doll. So, while you could go balls to the wall with any and all of these, I suggest you just use one or two at a time. Just give some simple instructions to solve specific problems; people are too far apart (spacing), they look a little awkward or out of place (hands), they look stressed or tense (lean). You don’t need much of this to make your photos dramatically better.

Don’t worry, you’re not getting people into a whole photoshoot or anything, and you’re not barking orders. In fact, when you take a picture of someone, and you give them some simple instructions to look better in the photo you’re currently taking, they will deeply appreciate it. Go ahead and give it a try!